Sean Boyles is a San Jose art legend. He may not admit it, but the guy has so much history within the art community of San Jose you'd be hard pressed to find someone who wasn't familiar with him or his work.

Sean is a member of the old Crab Shack crew, out of Oakland. Some extremely talented artists lived together while going to the California College of Arts and Crafts, and they lived above Arts Crab Shack on Broadway. Included in this amazing bunch were Sean, Joe To, Rob Sato, Ako Castuera, Ryohei Tanaka, and David Choe.

Sean has always surprised me at the high amount of work he can produce, and at a consistently high level. It seems like every week he has some project he's doing, some live painting event to participate in, some mural piece to finish. You'd think a guy running his own business would take it easy on his own personal art, but its like he's actually increased his output. I was very pleased that he included The Last Cat art show in his schedule and I asked him a few questions related to his pieces, and about him and the shop in general. 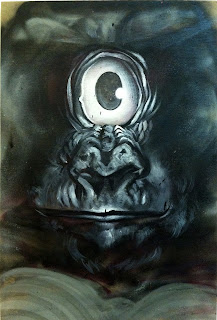 thelastcat: So how long have you been in San Jose? I'd assume your whole life.

Sean Boyles: Pretty much. I lived in Oakland for about 6 years, that's how I met Joe, Dave, Rob, Ako, and Ryohei. But there's no place I've lived longer, or would rather live. I grew up here. It's home.

thelastcat: Tell me about the Cyclorilla. How did you come up with him? Does he have a back story?

Sean Boyles: I started painting them a few years back because they made me laugh a little. I was painting a bunch of monsters and zombies, and I remembered this painting from that thick-ass-heavy art history book they make you buy in art school. The guy's name was Odilon Redon, and he painted a giant, dorky looking perv, cyclops, creeping out behind a hill, spying on a naked lady sleeping. It made me want to paint a giant cyclops, but I made it more beastly and less pervy, and still kept it dorky. It sort of came out like King Kong, but it had bright white male tits(well really more nipple than boob), and a matching beer belly. That was the godfather to the cyclorillas.

Sean Boyles: I like to think of them as being part of the planet of the apes mythology. When the monkeys get smart enough to start running the joint, they'll explore their cave monkey days, and come across some one eyed gorilla paintings, and since humans are stupid filthy animals, they'll figure a monkey painted them, and I'll be in the ape art history books.  probably as an unknown monkey, because I always forget to sign my paintings. 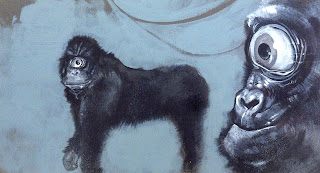 thelastcat: How long has The Arsenal been around? What gave you and Roan the idea to open it?


Sean Boyles: San Jose has some things going for it. There's a drive in, a couple good flea markets, some good people, a lot of artists...but it's always had shit for art stores. There's a michaels and Aaron brothers here and there, and there's this other corporate chain store, but they're based out of palo alto, so they're overpriced, uppity, and for old hobbyist. Me, Roan, and other artists would always go up to Berkeley, Oakland, or San Francisco to buy non generic art supplies. See when you're an artist or creative person from San Jose it's harder for you. The city doesn't really have a rich history of supporting artists, or have a ton of venues like San Francisco. There aren't a bunch of affordable live work, studio spaces, or artists communities like in Oakland. But there's a ton of talent here. I mean there's over a million people. So as an artist you have only a few options. Option one: deal with it, meaning take occasional trips to Oakland, San Francisco, or Berkeley.
Option two: move.
We chose option three: build your own, support your own community, make our city the way we want it. All my favorite San Jose people are doing the same thing: making our own galleries, our own shops that sell what we like, our own clothes, music, whatever. When people say "San Jose sucks, there's nothing to do, I'm moving to the city", I always think, cool. You won't be missed. Go be entertained in the city, or wherever. This city isn't for everybody. It's for people who take what they need, and make what they want. 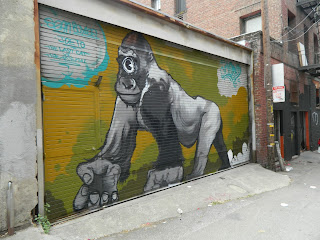 thelastcat: Why did you guys start doing art shows at The Arsenal?

Sean Boyles: It's funny, when we first opened we never wanted to do art shows. There was already too much to figure out, and too much to do opening and running an art store. I've been tired since 2011. That first year was my least productive year as an artist. I think what's changed is, we're trying our hardest to make the store great, but with us just doing it on our own, it's going to be a marathon. So on our way to growing our store to meet our vision, we can do other things we're good at: teach classes, print shirts, host pop up shops, and have art shows. We also have some good people around us. Regin, Roan's sister knows the system better than all of us, and Augie can do anything. He's helped build walls and shelves, painted signs, and knows his art materials.

The thing I like best about our art shows is that there's no pressure to seek out the next big trend. We don't have to count on selling out our shows to pay the bills. The art store is for that. This gives us the freedom to show artists we like based entirely off of their work. So far the art shows have all been busy and the art sales have been good. We're proud to be hosting The Last Cat Art Show, and I can't complain, I got to be a part of it. 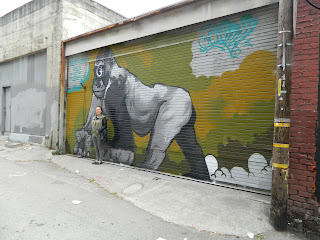 The Last Cat and The Arsenal were recently able to collaborate on a mural in SF. The Last Cat sponsored it, and let Sean Boyles (with the help of Joe To) do his thing on the massive 15ft tall 18ft wide wall. 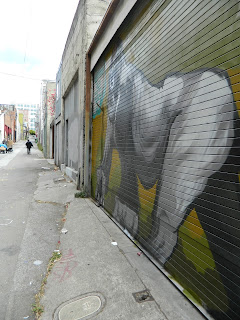 Its in Taber Alley in the South Park area of San Francisco, off of 3rd street. 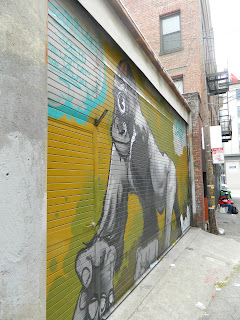 Defintely go check it out on the way, take a pic in front of it, enjoy it. We'll be working on some more projects too, so you'll see some other murals soon.
Sean Boyles work can be seen right now at The Arsenal, and online at:  http://www.thearsenalsj.com/show-catalog/
Email me at luke@thelastcat.com if you're interested in a piece.

manx cat
a cat without a tail is still a cat